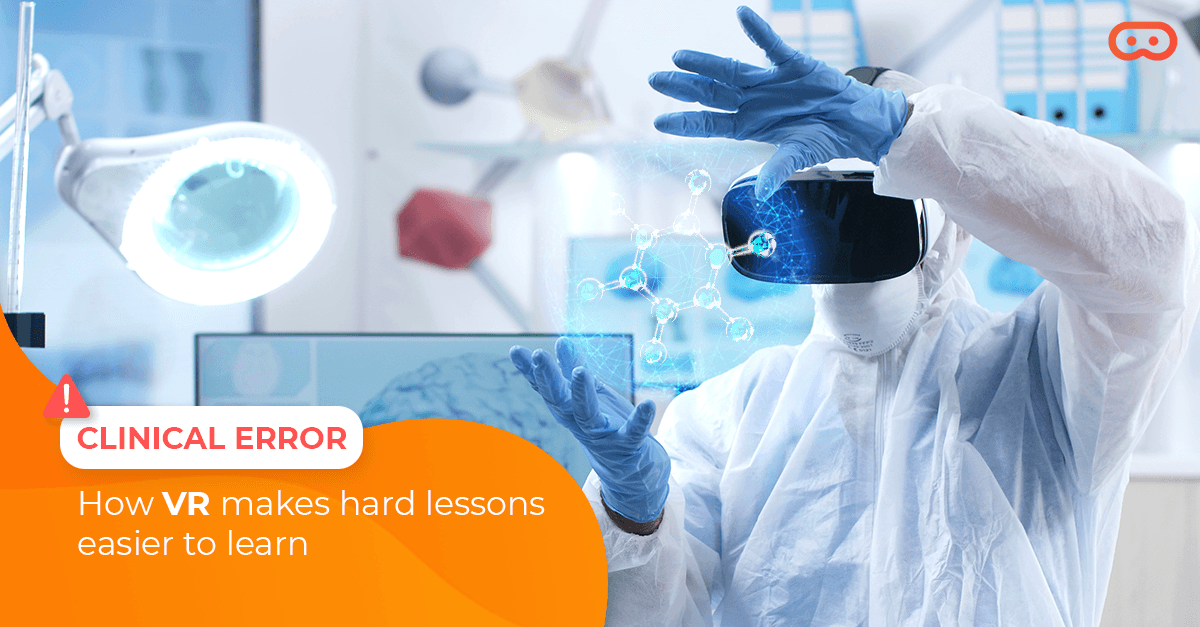 The foundation of modern medicine is based on scientific evidence performed by humans. People, on the other hand, no matter how skilled, are bound to make errors. Patients, clinicians, and the healthcare system bear a substantial burden due to these medical errors. According to a Johns Hopkins study, medical errors are the third leading cause of death in the United States, accounting for over 250,000 deaths annually. Durham's research has shown that most medical errors occur during the healthcare administration and prescribing stages. Modern science puts great emphasis on the importance of reducing medical errors. Is AR/VR or the implementation of medical simulation-based training a valuable tool to mitigate risks? This article will venture into the type of medical errors, how they occur and how VR can ensure smooth operational processes and promote service excellence.  Read on

What do we understand by a medical error?

A medical error refers to any failed process interlinked with an adverse outcome. Medical errors can be divided into two categories- i) omission errors and ii) commission errors. An omission error occurs when appropriate action is not taken. This could include failing to inquire about a patient's family history of clotting disorders or failing to perform a necessary test. In contrast, errors of commission result from actions taken during complicated medical procedures, such as giving one patient another's medicine or doctors performing surgery on the wrong side of a patient.

The cost of medical errors

Medical errors can be fatal in many ways for society.

Implementation of simulation training in reducing error- a timeline

The aviation industry was perhaps one of the first to demonstrate that simulation training can reduce error. Some fatal accidents during training that led to the death of 12 pilots forced the US Army to purchase and implement the first aviation simulator in the 1930s, revolutionizing new pilot training in terms of both safety and cost. The National Aeronautics and Space Administration (NASA) advanced the use of simulators for flight training in the 1960s by developing the first fully digital simulators for Apollo missions. While these efforts were initially expensive, they eventually became a cost-effective way to improve safety and training outcomes.

The medical industry was not far behind in using simulation to elevate training and safety outcomes. The application of medical simulation has evolved significantly over time. For centuries, medical simulation has been practiced using anatomical models made of clay (Rosen 2008). In 1911, the first simulation mannequin was introduced. Although it was a crude model, it paved the way for the development of computerized models later in the twentieth century.

– Anatomy and the study of the human body

– Practicing interactions with patients and exams

i) Improving patient safety and quality of care: Healthcare providers can rehearse rare and dangerous scenarios using virtual and augmented reality simulations. Emergency and critical care conditions are among them. This technology also enables healthcare providers to learn from their mistakes without causing genuine patient discomfort. Users can learn crucial skills such as teamwork, leadership, interpersonal communication, decision-making, prioritizing, and stress management by participating in simulations (Flanagan 2004).

ii) Reducing the cost: The 2018 Haerling study showed that VR and AR training costs are significantly lower than mannequin simulation. It is partly because VR and AR do not require the use of faculty and laboratory personnel, physical facilities, durable supplies, consumables, and other supplies and personnel needed to set up a training session.

The medical simulation will continue to improve the quality-of-care providers deliver in their respective fields. The technologies not only enhance patient safety but also facilitate a wide range of low-cost training scenarios. In light of the current trend of their rapid adoption, it is not an exaggeration to say that virtual and augmented reality medical simulations are going to be a crucial part of medical training in the future.

To find out more about our immersive technology-driven projects and applications of XR in healthcare, visit us at www.provenreality.com.